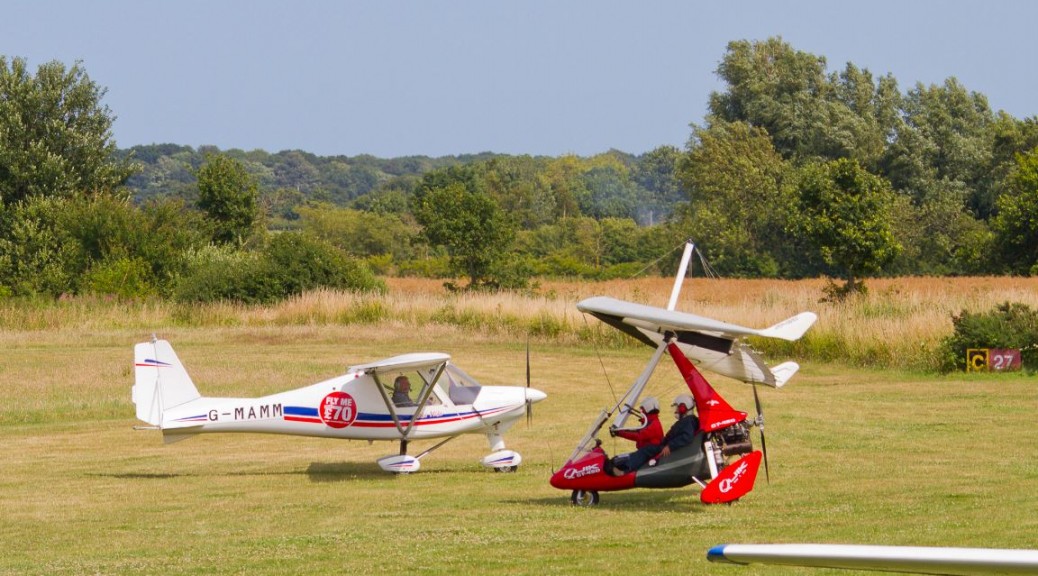 Originally an aircraft maintenance engineer in the Royal Air Force, Gary has been flying for eighteen years plus on a variety of microlights, both weightshift and 3-axis as well as light aircraft. He is our Chief Flying Instructor, teaching on both the C-42 and GT450 and is also a Flight Examiner for both types.

In 2020 Gary attained his PPL (Gyroplanes), adding another string to his bow.

When not flying Gary puts his aircraft engineering background to good use  maintaining MALSA’s fleet and is an enthusiastic motorcyclist and novice horse rider.

Dave is a very experienced glider and SLMG instructor and examiner, he flies aerobatic tail draggers for fun and joined the team instructing on our C42 late in Spring 2021.

MALSA are actively seeking more Instructors for our thriving Flight School. Please contact us if you’d be interested in joining our team.

Mid Anglia Light Sport Aviation was begun originally as Mid Anglia Microlights (MAM) and opened at Beccles in August 2013 by Anthony Preston, a former RAF Pilot, aerobatics instructor and microlight factory test pilot with just one aircraft, a 3-axis C42 G-CFAV. Although he retired from flying training in mid-2018, Anthony is still a regular contributor to the BMAA’s magazine, Microlight Flying. Some of his interesting and informative articles can be found here. Anthony was joined in late 2013 by Gary, initially teaching on the C42 and soon thereafter on the GT450 as well, when this second aircraft type was added.

In 2014 MALSA added Pat Fenn and Bev Peake to the team, both are keen pilots who were trained by MALSA. Pat subsequently became the Company Director when MAM incorporated in 2017 and Bev handles infrastructure, Gift Voucher distribution & administration.

Over a 6 year period, MALSA have expanded from just 1 aircraft to 5 and have helped numerous people to realise their dreams of flight, as well as creating the MAMRFG to enable those pilots who may not be able to run their own aircraft to fly conveniently and affordably.

Mid Anglia Light Sport Aviation is based at Beccles Airfield, conveniently situated on the Norfolk/Suffolk border – serving Norwich, Great Yarmouth, Lowestoft, Ipswich and surrounding area – just off the A146.

Please note – putting our postal address into a SatNav will NOT take you to the airfield entrance and we are not co-located with UK Parachuting!

The key to finding us by Sat Nav is to enter ‘Brock Road, Beccles’ or alternatively the postcode NR34 7PJ which although it is NOT our actual postcode will at least get you on the right road.

We’re halfway along Brock Road and the airfield entrance is clearly signposted. Upon entry, park in the car park and follow signs to Virage Helicopter academy where we are co-located

Do not follow signs for ‘Ellough Industrial Estate’, ‘UK Parachuting’  or ‘The Old Aerodrome’ as these will take you in the wrong direction.

If in any doubt, simply give us a call beforehand.

Take the A146 towards Lowestoft. Just before the village of North Cove turn right (signposted Hulver Street). After about 1 mile along a narrow lane (Brock Road) the Airfield is on your right.

Take the A146 towards Norwich, after approx seven miles, at the village of North Cove turn left (signposted Hulver Street). After about 1 mile along a narrow lane (Brock Road) the Airfield is on your right.

Follow the A12 to Frostenden, take a left turn after toilets on to B1127, follow signs for Hulver Street, drive through the village, take the first turn right, then immediately left into narrow lane (Brock Road) drive carefully up hill and Beccles Airfield entrance is on your left.

Your microlight flying school for Norfolk and Suffolk